Working for Solidarity during pandemics

“Given the alarming situation of COVID-19, our volunteers had the opportunity to say ” I am going to go back to my country and take shelter under the blanket next to my Mum”, but they did not consider this option for a second and that is admirable.“

We speak with Alba Gómara, coordinator of Volunteering and the European Solidarity Corps projects, and co-head of the Primate Rehabilitation and Rescue Department.

END_OF_DOCUMENT_TOKEN_TO_BE_REPLACED

Dear Caregivers Colleagues, WE MISS YOU!

The COVID-19 pandemic is a crisis that affects everyone without exception. The virus arrived just a few months ago and has already made a serious impact on our lives: it has taken thousands of them, and put the rest to a standstill. We live in an era of uncertainty; and fear has established itself within our homes. Much like tackling the virus itself, there is only one way we can overcome that fear – by staying united in battle. END_OF_DOCUMENT_TOKEN_TO_BE_REPLACED

Our concern about the risk of the virus to humans is extended to non-human primates, of which almost 70% are in danger. This, of course, includes the chimpanzees we care for at MONA. We share almost 99% of our DNA with them, and this increases the chances of transmission of the coronavirus. In fact, common human respiratory viruses have caused deadly outbreaks in great apes in the past. END_OF_DOCUMENT_TOKEN_TO_BE_REPLACED

END_OF_DOCUMENT_TOKEN_TO_BE_REPLACED

The exact origin of COVID-19 has not yet been identified, but human cases of coronaviruses are generally transmitted by the consumption of wild animals, known as “bushmeat”. END_OF_DOCUMENT_TOKEN_TO_BE_REPLACED

Why do deadly human diseases arise in biodiversity “hot spots”?

Just a decade or two ago, wild tropical forests were thought to threaten humans by harboring the viruses and pathogens that lead to new diseases in humans, but is this really the case? END_OF_DOCUMENT_TOKEN_TO_BE_REPLACED

Light in the dark

The COVID-19 pandemic has made us stop and reflect, giving us the opportunity to do better – individually and together. We must bring out the best in ourselves and show that humans feel affection, understanding, and solidarity towards others, whether they are humans or not. Humanity must, at last, open its eyes to the importance of protecting the environment and the conservation of species.

END_OF_DOCUMENT_TOKEN_TO_BE_REPLACED

Show some love this Valentine’s Day!

We’re fast approaching Valentine’s Day and it’s time to start thinking about what gifts you might purchase to adorn your loved ones and make them feel special! But what could be more romantic than buying a gift that can not only be enjoyed by your sweetheart, but extends that kindness and compassion in a way that can help others too?

At Mona Chimpanzee Sanctuary we have lots of ideas for meaningful gifts that will really show that special person you love them. Take a look at our suggestions: END_OF_DOCUMENT_TOKEN_TO_BE_REPLACED

The importance of raising your voice

The well-known restaurant booking platform ElTenedor released an ad in which they used a young chimp. MONA took action and launched a petition demanding that the brand withdraw it. Within a few days, more than 36,000 people had signed the petition on Change.org, and ElTenedor withdrew its advertising campaign and promised not to use chimpanzees or other wild animals in their commercials.

We want to congratulate ElTenedor for making the right decision and being so receptive to our message. Surely they will serve as an inspiration for many other brands that, due to ignorance, continue to use wild animals in their advertising campaigns.

Why is it important that ElTenedor withdrew its ad with a young chimpanzee? 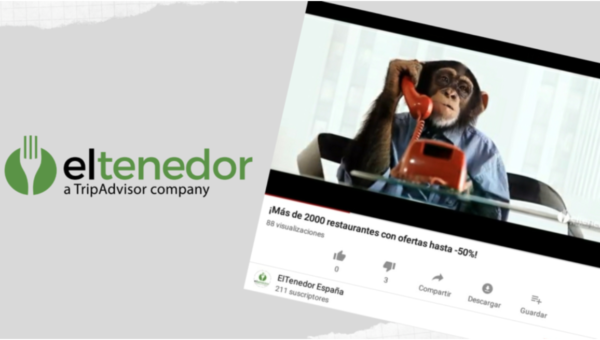 Because of the big negative impact this representation has on society. It perpetuates the mistreatment of these individuals and of the next youngsters that will be used. (Yes, there are still creative minds who think that renting a chimpanzee to market a product is a great idea).

But the problem is not “only” the suffering of a “few” individuals. Seeing chimpanzees in disguise and acting, revives the illegal trafficking of primates, destined for the lucrative world of exotic pets. Already we have encountered about 80 cases of different species of primates in the hands of private individuals. Many more than those used in entertainment. And that shows the great problem that still exists today in the legislation and control of ownership, but especially in the importance of the education as an agent of change. From our beginnings we are working for the awareness of society, through guided visits and the training of future primatologists, but what is being done at the legislation level?

When Dr. Marquès and team presented the results, some of them caught us by surprise. The samples taken by the caretakers of each of the chimpanzees were used to determine their subspecies and the hypothetical country of origin. But in addition to the original purpose, the samples were used to verify possible kinship relationships and have uncovered a reality: END_OF_DOCUMENT_TOKEN_TO_BE_REPLACED