MONA is one of many organizations that come together on May 3rd-9th to celebrate International Macaque Week to increase awareness about the plight of macaques all over the world and what we are doing to protect them. Of course, at MONA we specialize in caring for Barbary Macaques and I am excited to tell you all what we can all do to protect Barbary Macaques in the wild and why we think they are so special: 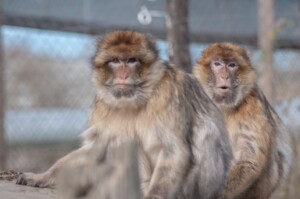 Where do Barbary macaques come from?

Barbary Macaques (Macaca slyvanus) are the only species of non-human primate endemic to Algeria and Morocco and there is also a small population introduced to Gibraltar. Barbary Macaques are classified as endangered and in Morocco approximately 1,500 animals are found only in the Rif mountains and the Middle and High Atlas Mountains. In Algeria, around 1,336-3,506 individuals are found in the Tellian Atlas in the north and a few national parks.

Why are they endangered?

Barbary Macaques’ main threats are habitat loss due to fragmentation and degradation due to the domestic and industrial consumption of timber and overgrazing by livestock. Human conflict is another significant threat reported often as a result of repeated crop-raiding. The illegal primate trade also has a huge impact on Barbary Macaque populations and also exploitation as photo props for the tourist industry.

What the UK doing to stop the trade in primates and why primates do not make good pets?

Shockingly it is entirely legal to keep a primate as pet in the UK. Although most primate species do need a license including Capuchins and Macaques. No license is needed for Marmosets or Squirrel monkeys. It is estimated that there are around 5,000 primates currently being kept as pets in the UK and according to RSPCA data, the most commonly kept primates are marmosets, followed by capuchins and squirrel monkeys. This is set to change very soon after the UK Government has launched a consultation on a proposal to ban the keeping of primates as pets in England.

Primates do not make good pets ever for the follow reasons: 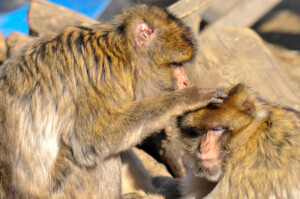 Where did Titin, Pipa, Katy and Abu come from and see the big difference in them today?

MONA’s four Barbary Macaques Titin, Pipa, Katy and Abu are all victims of illegal trafficking for the pet trade. Titin was found abandoned, chained to railings at the entrance a block of flats in Spain. Pipa was found by authorities hidden in a shoebox in a car returning from Morocco. Katy was used as a prop for photos with tourists in Costa Brava. Abu was abandoned at a dog shelter and likely kept as a pet until he became too difficult to handle. Today they all live together at the Mona sanctuary in a naturalistic enclosure with plenty of enrichment to ensure that they are happy and healthy.

How can you make a difference to Barbary Macaque welfare and conservation?

There are  a few simple things you can do to help Barbary Macaques: